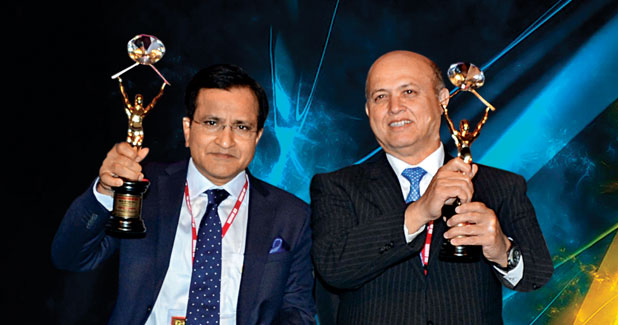 Seventeen winners, 300 attendees, and for the first time, the CW Annual Awards went live and recorded an online viewership of over 3,500 from India and across the world. This was the 14th Construction World Annual Awards 2016, organised on October 21st at Hotel Four Seasons in Mumbai.

Among the shining winners were the showstoppers of the evening – the Construction World Man of the Year in each, the Public and Private sector, were announced and honoured. This has been an intrinsic part of the awards. Initiated in the year 2010, the award is presented to a person who has made remarkable achievements in the year and through his efforts has propelled his company and the industry forward.

This year, a panel comprising eminent honchos from the industry, united once again to select the – CW MAN OF THE YEAR. The jury handpicked this awardee from a list of nominees, for outstanding contribution to the construction sector. And, having culminated into a debate at great length, the jury panel made a decision to give this award to a stellar player in both – the Private and the Public sector. And, Raghav Chandra, Chairman, National Highways Authority of India (NHAI) was voted as the CONSTRUCTION WORLD – Man of the Year in the Public Sector and Vinayak Deshpande, Managing Director, Tata Projects, as CONSTRUCTION WORLD – Man of the Year in the Private Sector.

On being honoured the Construction World Man of the Year 2016 –Public Sector, Raghav Chandra, said, “I am gratified and deeply honoured. All the work that we are doing would not be possible if it were not for the enabling environment which the government is providing, the strong back up and support, the high quality of our officers, their motivation, dedication and seniority.”

And, Vinayak Deshpande, on being honoured the Construction World Man of the Year 2016 – Private Sector, expressed, “I thank, first our customers and then the authorities in the government, organisations like NHAI, DFCC, who are all doing an excellent job, because of which the construction market is growing, which in turn, gives us an opportunity to drive the growth for our company. I’m proud of the platform (Tata Projects) I am holding here, without which I personally cannot be here.”

About Raghav Chandra:
Raghav Chandra has been at the helm of paving the roadways for India. Currently Chairman of the National Highways Authority of India (NHAI) in the rank of Secretary to the Government of India, Chandra has been assigned with the role of developing, operating and maintaining national highways across India. This is what is known to be the largest ongoing infrastructure programme across the world.

Under his leadership, several important changes in the highways programme have been ushered in NHAI’s working. This is evident from the fresh projects that are being awarded by the authority – in full swing – to improve the pace of construction in an efficient and effective manner. Speedy delivery, higher quality and enhanced commuter comfort is on his agenda.

An alumnus of the prestigious St. Stephen’s College, Delhi University, and the Harvard University, USA, where he was an Edward S Mason Fellow, Chandra is an officer from the 1982 batch of the IAS. He has written extensively for national journals on management and economic issues.

In Madhya Pradesh he has been District Magistrate Khandwa and Jabalpur Districts, Founder and Managing Director of the MP Road Corporation, Managing Director of the State Industrial Development Corporation, CEO of the MP Housing Board, Chairman of SEZ Indore, Chairman, Pithampur Auto Cluster, MD of the State Civil Supplies Corporation and Principal Secretary of the Departments of Urban Administration and Revenue. As pert of Government of India, he has been the Director in the Ministry of Commerce, Joint Secretary Highways in the Ministry of Road Transport and Highways and Additional Secretary-cum-Financial Advisor for the Ministries of Agriculture and Culture.

About Vinayak Deshpande:
Vinayak K Deshpande is one of the country’s leading infrastructure professionals with 30 years of work experience in various senior managerial roles, across diverse industries.

He has been with the Tata Group for over 23 years and took charge as Managing Director of Tata Projects in July 2011. Since then, Tata Projects has achieved all-round excellence in its core business of industrial infrastructure.

This industry veteran has had many firsts to his credit in his current role. In 2014-15, he was instrumental in diversifying the company’s business in urban infrastructure into domains like urban Metro systems and high-rise buildings.

Deshpande is also playing a key role in the development of the Western Dedicated Freight Corridor, where Tata Projects is a member of the consortium that has already started work on the crucial 320 km stretch of the dedicated freight Gadkari stresses on reducing road accidents

The Minister of Road Transport & Highways, Nitin Gadkari said that the government is committed to reduce the number of road accidents by 50 per cent in the next two years and is employing various measures to achieve this objective. These measures are geared to tackle the problem through a multi-pronged strategy which include effective road engineering solutions at the design stage, rectification of accident black spots, improvement in automobile engineering, driver education, revision and effective enforcement of laws. The minister was speaking at the one day national level workshop on Road Safety Engineering Measures organised by the Ministry of Road Transport & Highways in New Delhi. Speaking about the importance of road engineering in preventing accidents and the resultant loss of lives, he said that simple and well thought out designs like the height of road dividers, placement of over-bridges and underpasses at appropriate places or the placement and design of speed breakers can often be very effective in ensuring safety on roads. line connecting Delhi and Mumbai.

Under his leadership, Tata Projects will be focusing on six business units – EPC, transmission and distribution, transportation, civil and environment, urban infrastructure and quality services.

Deshpande has been at the helm of many top Indian organisations, and his track record speaks for itself. At Tata Honeywell, he was the Managing Director of its India business for five years till 2004-05, where he grew the company’s operations pan-India, to achieve about 300 per cent growth. Thereafter, he had a successful stint as the Executive President (Operations) of Tata Teleservices.

At present, Deshpande is also on the Board of Voltas, Kennametal India and Philips Lighting India. As a member of the Confederation of Indian Industry (CII), he is closely involved with the industry body’s activities in the construction and transmission sectors.

After graduating in Chemical Engineering in 1980 from IIT-Kharagpur, he started with the design and sales of boilers and captive power plants at Thermax. His versatility was on show right at the beginning of his career. After a stint with Tata Honeywell where he was involved in industrial automation and process controls, Deshpande worked with Tata Teleservices, the mobility and telecommunications business of the Tata Group.

CW is proud to honour these true leaders, and we wish them good luck in the years to come.