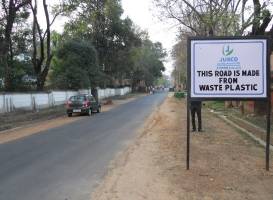 Can you imagine roads without potholes this monsoon? Indeed, India’s pothole menace has been a never-ending one, with the country reporting an increasing number of deaths year-after-year. Speaking of hazards, another is the modern-day problem of disposing plastic. Here’s a solution to tackle both these perils together: building plastic roads. Such roads not only prevent potholes but are eco-friendly and cheaper to build and maintain.
The roadmap
This technology was first used by Tyagraja College of Engineering in 2002 with a pilot inside the college campus. The technology is patented by TCE, Madurai, under the guidance of Dr R Vasudevan. Tata Steel’s Jamshedpur Utilities and Services Company (JUSCO) then got in touch with Prof Vasudevan in 2009, understood the process, reengineered it and implemented it, as per its own conditions and machineries. “We were the first to do it in eastern India, with a vision to replicate it further in other cities,” says Gaurav Anand, Chief Manager, Business Excellence, JUSCO.
Several cities then visited JUSCO to see the successful implementation of this technology. Civic officials from Ranchi, Chas, Giridih and Jamtara visited Jamshedpur in 2017 to learn this technology and replicate it in their respective towns. “We shared all the knowhow, along with the challenges and issues,” says Anand.Over 7.5 km of roads have reportedly been made with plastic at these four places. JUSCO had already proved this technology by being a pioneer of building such roads in Jamshedpur in 2011-12. “We were able to facilitate the construction of plastic roads not only in India but overseas as well,” avers Anand. “While in India, Ranchi, Bokaro, Dhanbad and districts of Chhattisgarh deployed this technology with our help, countries like South Africa, Kenya, Nigeria and Cyprusalso learnt from us and replicated it.”
To know more on how roads are built using plastic waste, watch out for the August edition of CW.
Previous
Next