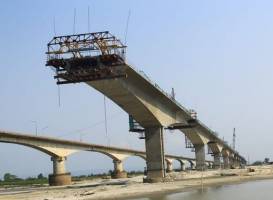 They say, ‘Don’t learn safety by accident.’ But that seems to be the way we do it in India.

Last year, Mumbai witnessed a stampede-like situation near Lower Parel station—which witnesses a footfall of nearly 150,000 every day—as the Western Railway closed the road-over-bridge (RoB), citing an audit report by IIT-B, which deemed the structure unfit owing to corrosion. But there was no concrete dispersal plan for pedestrians and vehicles and no signage or officials to direct the crowd. What’s more, torrential downpour in July 2018 saw the collapse of the Gokhale RoB at Andheri station, which served as a pedestrian-accessible connection between the bustling east and west sides of Andheri. Other mishaps in the financial capital this year include the Mumbai CST foot-over-bridge collapse and the bridge crash at the Vashi Mini Seashore site.

Mumbai is not alone—Kolkata and Varanasi, among others, have witnessed similar mishaps. In fact, Kolkata has recorded three major bridge collapses in five years: Ultadanga Flyover (2013), Vivekananda Flyover (2016), and Majerhat Bridge (2018).

Art critic and social thinker once said, “Quality is never an accident. It is always the result of an intelligent effort.”  So have we lacked the requisite efforts when it comes to bridges?

Challenges in old bridges mostly arise from lack of availability of drawings, deterioration of material properties over time, and increase in loading since the time they were built.

According to railway expert Vivek Sood, “Indian Railways has a comprehensive system of inspections, carried out periodically at different levels, and special checks are done occasionally if warranted.” However, for many bridges, regular checks and retrofitting of existing structures are crucial. “This is an area that cannot be over-emphasised, not just in India but world over,” he adds. “There will always be old bridges. Inspection techniques, retrofitting techniques and health monitoring are important. The concept of load rating also requires a lot of work to ensure bridges give good service.”

To keep a regular check on bridges, though, we first need a record of them. Chetan R Raikar, Chairman and Managing Director, Structwel Designers and Consultants, says, “The Central Government is preparing an inventory of the total number of bridges on the National Highways along with condition assessment.” Structwel has been involved in assessment and testing of bridges for over three decades.

As per rough estimates, there could be about 2.5 lakh bridges on the National Highways. Maharashtra itself has over 15,000 state highway bridges. So across 33 states, there could be another 3.5 lakh state highway bridges. Put together, one can roughly consider 6 lakh bridges in the country, along with private bridges like jetties and others. And that is a huge inventory to maintain.

Evidently, managing bridges requires a system. “The system should collate all data from various types of bridges and try to assist human inspections with analytics gained from previous inspections and previous history,” suggests Sood. Such a system could identify problems early, with adequate time to address underlying issues.

Recent
Cement industry expected to remain in red zone till October 2020 at least: CARE Ratings Report May 2020
Real estate can generate 5 crore jobs May 2020
Investment opportunity of $575 bn in transport infra May 2020
Major ports see steep 21% volume contraction in April May 2020
Huge shortage of R&D approach in construction May 2020
How Bhilwara successfully managed the COVID crisis! May 2020
Supply of building materials on sites is an issue May 2020
State budget cuts to affect construction contractors May 2020
Building Safety and Efficiency Post COVID-19 May 2020
Will Modi's economic package revive Indian businesses? May 2020