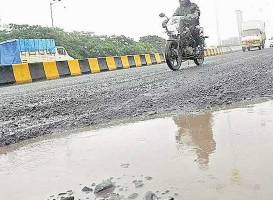 Smooth ride ahead for Mumbai?

BMC will send 52 engineers to IIT-Bombay in its efforts to rid Mumbai of potholes.
The poor quality of roads is a perennial concern in Mumbai, which abounds with potholes, roads under construction, and poorly maintained and shoddily repaired thoroughfares – all problems that are exacerbated in the monsoon.
For its part, the Brihanmumbai Municipal Corporation (BMC) has tried many ways to improve the situation, from launching an e-governance app, MCGM 24 x 7, to resolve civic complains to opting for cold mix as an alternative to the much-failed hot mix for filling potholes. Success, however, has proved elusive.
In 2018, the BMC stated that Rs 8.4 million had been spent on roadworks, according to media. Also, Rs 1.25 billion had been reportedly spent on the cold mix asphalt technology in the past monsoon – but it could produce only 255 tonne of mix. In fact, a citizens’ group led by Navin Lade recorded 26,934 potholes in the city last year.
Now, with just four months left for the arrival of the monsoon, potholes remain an eyesore in Mumbai.
And in its latest initiative to tackle the problem, BMC will send 52 of its engineers (sub-engineers, assistant engineers and executive engineers) from the roads department to the Indian Institute of Technology-Bombay (IIT-B) for a two-day training programme in March.
“The civic body will invest Rs 1.45 million for the two-day training programme that will cover road construction, the process and the materials to be used, and the mechanism to fill potholes,” shares
Vinod Chithore, Director, Engineering Services and Projects, Brihanmumbai Municipal Corporation. “The programme will also feature discussions on technical problems faced by city engineers and the reasons behind repeated potholes.
An on-site demo will be provided so that our engineers get acquainted with the latest technologies as well as projects undertaken with the help of IIT across India. The skills required for improvement of day-to-day activities will be developed.
Quality of supervision will be improved with assistance.”
A similar training programme was held a couple of years ago. However, Chittore believes that a knowledge refresher with the latest techniques is required from time to time. “Both techniques and technology will be shared with the staff,” he adds.
This is just the latest of BMC’s efforts to improve road quality in the city. The last initiative, as mentioned above, was the use of cold mix to fill potholes as hot mix cannot be used during the monsoon, only during a dry spell. Thus, the imported cold-mix technology, which is also economical, has definitely proven to be effective in some parts of the city during the monsoon.
Despite this, complaints of poor roads continue to barge in. Chittore begs to differ, though. He draws our attention to the fact that buildings have multiple utilities such as telephone and Internet connections and water supply lines going in and out of them. Roads remain under repair during the supply and maintenance of these utilities.
“It is not a question of poor quality of roads,” he points out. “There is always a utility set-up happening on the city roads, which damages the roads at large. These trenching activities are the major cause of potholes. The refilling or curing process is neglected by the utilities, thus causing potholes. During concrete construction, the traffic is  entirely closed whereas in an asphalt road, there is no liberty of time as there is a constant hurry to open the road for traffic.
Besides, road networks are overburdened nowadays because of excessive traffic, which also affects road construction."
Last year, BMC had invested Rs 12 billion in the maintenance and repair of roads. This year, with an investment of Rs 16 billion, it is hoping to provide Mumbaikars a smooth ride. “A lot of work has already been carried out and the ride will definitely not be bumpy this year,” he assures. “We are trying to give the citizens of this city a smooth ride.” Time will tell.
- Diksha Jawle
Share your views on bad roads in Mumbai at feedback@ConstructionWorld.in
Previous
Next
Recent
Transit Retail opportunity projected to see manifold growth by 2030 to US$ 21.6 bn February 2020
Srei Equipment Finance, UCO Bank to co-lend through iQuippo platform February 2020
300 realty developers approach the Rs 125 bn AIF for financial support for projects February 2020
AG&P, ADNOC L&S sign agreement for the long-term charter of a FSU February 2020
Phase-1 of L&T-built Light Rail System (Metro Express) in Mauritius inaugurated February 2020
The VTS Group, celebrating its 30th anniversary in 2019, has presented a new website February 2020
Toto India hosted the architect talk with Taro Muroi and Ar Tsuyoshi Tane February 2020
Bidar airport developed at an estimated Rs 110 million February 2020
Builders in Gurugram may face penalty of up to Rs 3 billion February 2020
KONE inaugurates its new warehouse in Mumbai, India February 2020