The ‘City of Nawabs’ is speeding up!
Lucknow Metro recently completed the successful load testing of the 22.878-km-long stretch from the Chowdhary Charan Singh International Airport to Munshipulia of the North-South corridor and has also started its trial run. The metro work was completed in February, ahead of the initial deadline of April 2019, and the stretch is expected to be operational in March.
“We faced uncountable challenges throughout the construction phase,” says Kumar Keshav, Managing Director, Lucknow Metro Rail Corporation (LMRC). “But the entire team faced them with strong determination along with the continuous hard work, day and night.”
Benefits and facilities
Currently, it takes around 90 minutes to reach Chaudhary Charan Singh Airportfrom Munshipulia. With this route being operational, the distance will be covered in just 40 minutes.
The stretch will have 21 stations. Each metro station has four elevators and four escalators, except the Amausi and Mawaiya station, which has three elevators and escalators, and Singar Nagar, which has two. In the underground section, Sachivalya Metro Station has five escalators and four elevators and Hazaratganj has six escalators.
Apart from basic amenities in place, such as air-conditioning, CCTV cameras, free Wi-Fi, drinking water and effective public information systems, LMRC has made special planning and arrangements to cater to the needs of differently abled passengers; for instance, special toilets have been set up at all stations for them. “Lucknow Metro is also unique for its public information display system,” says Keshav with pride.
For the safety of commuters, LMRC has used fire-retardant materials, fire and smoke detection and protection, the use of emergency communication facilities and CCTV cameras.
Construction techniques
Lucknow Metro’s structures have been designed to sustain for at least 100 years. “Considering this, the project employed high-quality materials in its construction, which include best-grade cement, virgin steel and building blocks,” shares Keshav. “These were procured from primary manufacturers directly approved by the government.”
Major equipment such as piling rings, D-wall grab and heavy and lightweight cranes were used in the construction phase. And for underground work, the project employed man lifters, TBMs, Poclain long-boom escalators and specially designed trucks, among others. Besides, LMRC used technologies such as the precast technique, launching a special 60-m span by push technique, and cantilever construction (CLC) in the construction of this stretch.
In fact, apart from this, LMRC has also executed a 60-m special steel span metro bridge at Awadh Rotary. “This bridge, built at about 13 m above ground, connects both the ends of the metro viaduct to provide special seamless connectivity for metro train operation,” says Keshav. “It is a rare work done in the capital of Uttar Pradesh.”
Moreover, at Mawaiya railway crossing, LMRC has constructed a special balanced cantilever metro span of 255 m (central span of 105 m; end spans of 75 m each). This is one of the most challenging andcritical jobs, executed at 21.5 mabove ground while passing over a railway crossing at a 15.2-m height from the ground level under extremely difficult situations in the middle of the traffic-heavy main road. Also,along the same lines, Lucknow Metro has constructed a 177-m CLC spanat Gomti River, which is considered to be one of the fastest completed spans over a river in India.
Eco-friendly construction
LMRC’s metro stations and depot have been designed and built as green buildings in accordance with the standards of the Indian Green Building Council (IGBC). Lucknow Metro has so far relocated 410 trees and a total of 537 trees have been saved through changes in design.
Other initiatives undertaken, as Keshav elaborates, include regenerative braking in the trains, which will result in saving 30-35 per cent of traction energy; use of 1 per cent criteria for underground stations in the air-conditioning system; variable voltage variable frequency (VVVF) drives for all lifts and escalators; LED lights at all stations and in trains; and energy-efficient equipment for the environmental control system (ECS) and tunnel ventilation system (TVS) for the underground stations.
Further, a 1-mwp capacity solar roof plant has been installed at the Transport Nagar depot, along with a waste composting machine. LMRC has also planned a 1.5-2 mw solar energy under the RESCO model from the roof-mounted photovoltaic cells on stabling and inspection sheds at the Transport Nagar car maintenance depot.
The funding model
The completion cost (including central taxes) of Phase-IA of the 23-km-long North-South Corridoris Rs 68.8 billion, as per the revised DPR submitted to MoUD in October 2013. The project is being implemented on a 50:50 model (DMRC model) with equity sharing by the Centre (20 per cent share) and the Uttar Pradesh Government (23 per cent share). Over 50 per cent of the project is being funded through foreign debt from the European Investment Bank (EIB). The FIRR for the project is 8.12 per cent while the EIRR is 19.43 per cent.
Major challenges
Addressing the challenges faced, Keshav says, “The metro depot land, a green area with many tress, was earlier used by PAC and then acquired by LMRC to construct its depot. We didn’t cut any trees;instead, we relocated them to our depot boundaries with the help of heavy cranes. Also, at Transport Nagar, there were different gas lines below the ground of the station. With the help of modern equipment, we detected the position of the gas lines, which further helped us in the piling work for this metro station.”
Just a couple of examples of how smart thinking and impeccable execution combined to create the Lucknow Metro, another fine chapter of excellence in India’s mass rapid transport story!
- SERAPHINA D’SOUZA 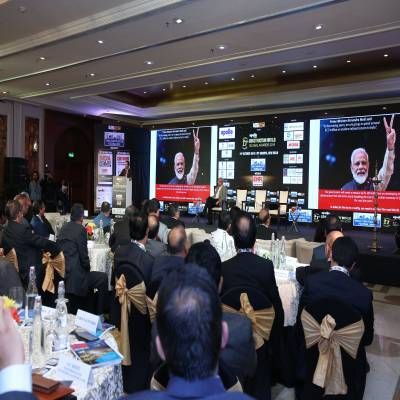 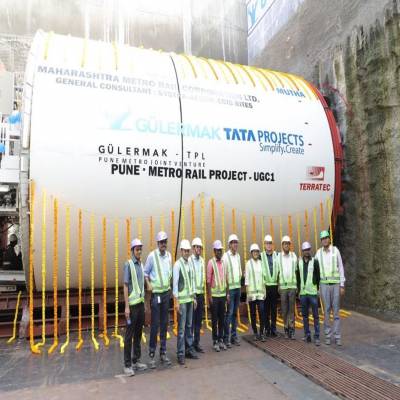