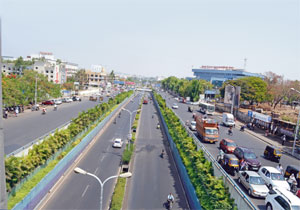 The metro line will give a big boost to our city.

Dr Shrikar K Pardeshi, Municipal Commissioner, Pimpri Chinchwad Municipal Corporation
The twin industrial township of Pimpri-Chinchwad has given Maharashtra a reason for pride. Located in Pune district, it is counted amongst the fastest growing urban agglomerations of the state and the fourth fastest in India after Hyderabad, Surat and Visakhapatnam. And overseeing the growth of its infrastructure is the Pimpri-Chinchwad Municipal Corporation (PCMC). It provides civic amenities to the population like potable water supply, provides and maintains basic infrastructure like roads, street lights, gardens, playgrounds, hospitals and dispensaries, and focuses on town planning. ôWe have plans laid out on how the city will look in 2030 and 2040,´ says Dr Shrikar K Pardeshi, Municipal Commissioner, PCMC. In conversation with SHRIYAL SETHUMADHAVAN, he speaks about what PCMC has achieved and its strategies for the future.

What has been your value addition to the city´s development since 2012?
We have tried to make the administration more citizen-centric in the form of e-governance through which we are in constant dialogue and provide services. The latest initiative called Sarathi (or System of Assisting Resident and Tourist through Helpline Information) is a helpline that offers information to people in various ways: call centre, books, PDF format on the website and mobile apps.

In terms of projects, we recently completed the Science Park, a science centre, with the support of the Union Ministry of Culture.

What is being done under JNNURM?
The city has been sanctioned 11 projects in the past year of which we have completed four: sewerage Phase-1, sewerage Phase-2, water supply Phase-2 and e-governance. The remaining seven projects include three bus rapid transit (BRT) projects, one water supply Phase-1 project, a storm water project, one on solid waste management and one on bus procurement.

Tell us about the industrial development in the city.
This city owes its existence to industry. With companies like Tata Motors, Baja Auto, Force Motors and many more setting up facilities here in the past decade and a half, there has been a slight shift in the nature of industries. IT has come up in a big way. Hinjewadi and Talawde are known IT hubs in Pune, adding to Pimpri´s growth because of their proximity to us. Also, industries like Volkswagen, Mercedes Benz and Mahindra have big plants in Chakan û a major town bordering PCMC ´ and require supplies from the medium and small-sector industries, many of which are located within the Pimpri-Chinchwad area. So the developments in these two areas have given a major boost to the service industry.

Do you see the city´s annual growth rate exceeding the current 15 per cent in coming years?
Certainly. These industrial areas are magnets of growth. Also, adding to growth are two major upcoming projects: the Pune International Convention Centre by the Maharashtra Government that is being developed by the Pimpri-Chinchwad New Town Development Authority and the Pune International Airport.

Yours is amongst the first municipal corporations in India to introduce green building initiatives...
To date, we have about 40 projects registered under Green Rating for Integrated Habitat Assessment (GRIHA). These are in the process of being constructed or built and are expected to reduce energy consumption by 30-50 per cent and water consumption in construction by 40-65 per cent. We offer developers incentives in the form of concessions in development charges, which they pay to the corporation.

How is the metro route from Swargate to Pimpri- Chinchwad being developed?
The Pune metro area basically comprises the Pune Municipal Corporation and PCMC. While Pimpri-Chinchwad has developed as an industrial area, Pune has developed as a traditional town. Hence, people have always been commuting from Pune to Pimpri-Chinchwad. Even today, the passenger per hour per direction (PPHPD) is said to be the highest in the Swargate to Pimpri-Chinchwad route. So having the metro line on this route will definitely ease traffic on the roads. However, of the planned 16.59 km, 7.15 km, which is in the Pimpri-Chinchwad area, will be completely over ground. Once it enters the Pune municipal limits, a part of it will be over ground, and in the core city the old city area where roads are very narrow, it will be underground. This span is about 3.5-4 km.

What is the funding pattern like and when do you plan to float tenders?
The project, which will be developed by a Pune Metro special purpose vehicle (SPV), is expected to cost around Rs 6,900 crore. The funding pattern is such that 20 per cent will come from both the Centre and state governments, 10 per cent from the corporation, and the remainder will be raised through other resources. We are awaiting the Centre´s nod following which the Pune Metro SPV will float tenders for further activity. We expect this to happen within the next six to nine months.

Also, please update us on the CCTV project.
With increasing population pressure on the city followed by a couple of unfortunate terrorist attacks, the most recent one being the German Bakery blast, the government has decided to augment the city´s security by installing about 1,000 CCTV cameras across Pune and the PCMC region. Roughly about 700 cameras will be installed the Pune area, with 300 in the PCMC area. In addition, depending on requirement, both municipal corporations can take up an additional number of cameras. This project is still in the pre-tendering stage.

Tell us about the problem of illegal structures in Pimpri-Chinchwad.
Following a High Court directive, we have conducted a massive drive against illegal construction. We started in June 2012 and, to date, have demolished 395 constructions and filed FIRs against 2,049 constructions.

Although the city is known for its wide roads and connectivity with the national highway, pedestrian safety has been an ongoing issue...
Pedestrian safety is certainly a priority for us. There are provisions; but in some areas, the footpath height and speed breakers are not according to the standards of the Indian Road Congress (IRC). These are some minor issues that require retrofitting. To tackle this, we are in the process of preparing a new comprehensive traffic and transportation plan. There are certain guidelines issued by IRC for the construction of footpaths, signals, crossings, pedestrian subways and foot-over-bridges, etc.

Any other landmark projects that you would like to highlight?
The two-layer bridge developed one above the other at Nasik Phata will be a signature structure. To promote tourism, we are under the process of developing infrastructure where people can spend some time. An example is the Science Park, which is completed; upcoming projects include an aquarium, planetarium and riverfront development.

Another big project is 24 + 7 water supply. As against our current supply of three to four hours water to the city, we have successfully implemented a pilot project that has enabled us to provide 24 + 7 water supply to a population of around 40,000. This project has been executed in association with French-based Suez Environnement in 2012-13. After its success, we are now scaling it up; in the new project under JNNURM, we have taken 40 per cent of the area.

A proposal has been drafted and sent to the Government of India for sanction. Also, Citizen Facilitation Centres (CFCs) are an initiative we have introduced for the people whereby they can get their work done at the centre instead of commuting to municipal corporation offices. It is like a single-window system and we are now upgrading it from the current five centres to 25 centres in Phase-1 and 64 centres in Phase-2.

What is the budgetary support you are receiving from the government and other multilateral agencies?
PCMC´s annual civic budget for 2013-14 is Rs 2,040 crore. According to current practice, municipal corporations have to fend for themselves. It is only for projects under the JNNURM scheme that we get 50 per cent grant from the Government of India and 20-30 per cent from the state government.

We are leaders in the verticals we operate in

..beams a confident Vinayak Deshpande, Managing Director, Tata Projects Ltd (TPL). The company is on a roll as it gears up.. January 2014

Milli Majumdar speaks on the need to meet resource optimisation and mainstream sustainable development in India. We saw t.. January 2014