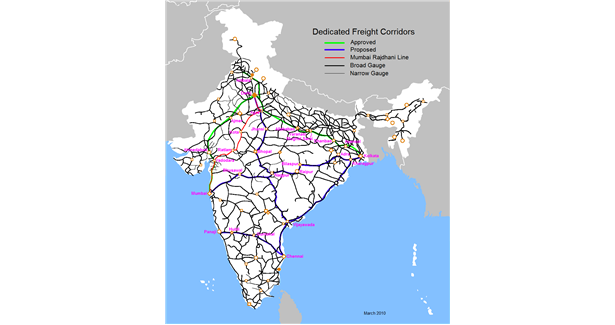 Owing to the slow pace of work being carried out on the two Dedicated Freight Corridors (DFCs) across eastern and western India, the Central Government has reportedly warned the state governments concerned to speed up the work, else they will end up defaulting on multilateral and bilateral loans worth billions.

As reported, the Centre has asked states to complete the process of forest clearances of 130 hectare of green land and get approval for 180 road-over-bridges (ROBs) which are part of the DFCs at the earliest. These issues related to delay and transfer of land from the states to the National Highways Authority of India (NHAI) are becoming impediments to the progress of work.

The planned 1,500-km western corridor has been proposed by the Jawaharlal Nehru Port Trust (JNPT) and will run across Gujarat, Uttar Pradesh, Maharashtra, Rajasthan and Haryana. The 1,400-km eastern DFC will cut through Punjab, Haryana, Bihar, Uttar Pradesh, West Bengal and Jharkhand.

There has reportedly been an increase in the project cost. The delay in work has already resulted in cost escalation. The cost of the two DFCs has reportedly increased from Rs 281.81 billion, sanctioned by the Cabinet Committee on Economic Affairs in 2008, to Rs 814.59 billion by 2016. Whereas the Western DFC has reportedly seen a rise in cost from the allotted Rs 165.92 billion in February 2008 to Rs 499.02 billion in 2016.

The action taken report prepared by the Cabinet Secretariat is also skeptical of the progress of land transfers in several states, and has instructed the governments to acquire and pass on balance land as early as possible. According to reports, the corridors are already set to miss the deadline target of March 2020. Further, 45 hectare of land still has to be acquired in Maharashtra, followed by 35 in Gujarat, five in Rajasthan and 12 in Gujarat. Haryana is also yet to possess the land in Asa village.