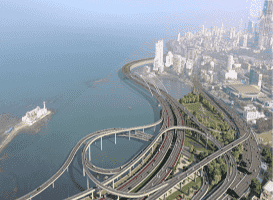 The Municipal Corporation of Greater Mumbai's (MCGM) ambitious Mumbai Coastal Road project is revving up with a geological investigation being ordered by MCGM Commissioner Ajoy Mehta. Besides, final designs of the tunnel, bridges and jetty are also expected for the submission.
A geological investigation is conducted mainly to ascertain the type of soil and rock that will help understand how deep the foundation could go. As of now, rock samples have been sent for testing and photographical survey has started, reveals a MCGM official on grounds of anonymity.

At a glimpse
Categorised into three packages – Package-1, Package-2 and Package-4 – MCGM has divided the 9.98-km south Mumbai phase from Princess Street flyover to the south end of the Bandra-Worli Sea Link; construction work on all packages will begin simultaneously. Package-1 from Priyadarshani Park to Baroda Palace and Package-4 from Princess Street Flyover to Priyadarshini Park have been awarded to Larsen & Toubro (L&T); while Package-2, which starts from Baroda Palace up to the end of the Bandra-Worli Sea Link, has been awarded to Hindustan Construction Company (HCC) in a JV with Hyundai Development Corporation. Separate bids were invited for each of these three packages.
Package-1 reportedly involves the construction of a 3.82-km, eight-lane highway over reclaimed land from Priyadarshini Park to Baroda Palace, including interchanges at Amarson Garden and Haji Ali.
The Haji Ali interchange is also expected to be a multilevel interchange inside Haji Ali bay, providing connectivity to the existing Khan Abdul Gaffar Khan Road. Package-4 involves the construction of up-and-down ramps from Marine Drive connecting to the underground road (twin) tunnel, which will pass below Girgaum Chowpatty and Malabar Hills and exit at Priyadarshini Park, connecting to Package-1.
Being a design-and-build contract, the project has been awarded to the contractor who will be working on the design. According to the official, these designs will then get approval from a general consultant appointed by the MCGM, while the project managing consultant will directly supervise the site.

Easing traffic woes
The Coastal Road is expected to be a mix of features such as tunnels, bridges, interchanges, elevated stretches and roads on reclaimed land, along with pedestrian underpasses and foot-over-bridges.
The road, which will run along the city’s western seafront, aims to provide swift travel from the western suburbs to south Mumbai, decongesting traffic in the city by connecting Marine Drive in the south to Kandivili in the north.
The MCGM has stated that the project will save 70 per cent travelling time and 34 per cent fuel every year. Speaking exclusively with the CW team at an event in Mumbai, Ajoy Mehta, Municipal Commissioner, MCGM, said, “The Coastal Road project is a huge engineering feat undertaken by corporation engineers in terms of design and everything else, and it will surely ease traffic and make Mumbai a better place.”

Up next!
Also, in a recent development, the Rs 70 billion contract for the 17-km Bandra-Versova Sea Link – which will eventually become a part of the total Coastal Road Project and is being handled separately by Maharashtra State Road Development Corporation – was recently awarded to Reliance Infrastructure. Undoubtedly, Mumbai is geared up for its next engineering feat!