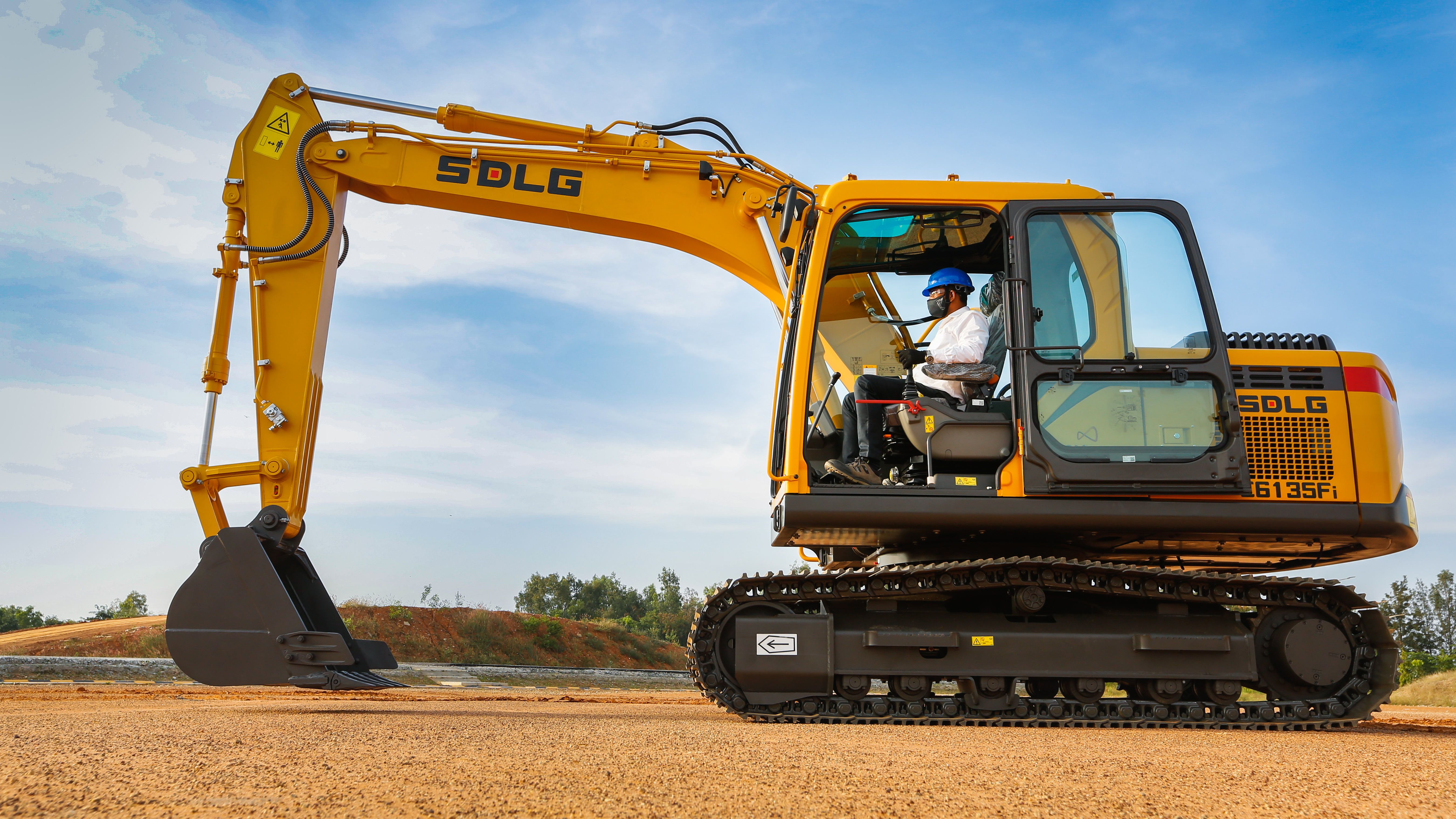 Following the success of SDLG wheel loaders and motor graders on the Indian market, the Volvo Group is now introducing its range of SDLG excavators, starting with the 13 t E6135Fi crawler model.
Through the combined offer of its Volvo and SDLG construction equipment brands, the Volvo Group is a world leader in wheel loaders – a position it now plans to replicate in excavators. The company has identified India as a key market to help achieve this goal, especially given the high demand for reliable and affordable machines in the 13 t class, and will introduce SDLG excavators to its 19 dealers across the country.
Indian customers’ positive reception of SDLG wheel loaders and motor graders has paved the way for this latest launch, which will strengthen the SDLG brand’s reputation for quality, safety and environmental care – values it holds in common with Volvo. SDLG products are also sold and serviced in India through the same dealer network as the Volvo brand of construction equipment, which is one of the best equipment dealer networks in the country. Customers can rest assured that they will receive best-in-class support throughout the machine lifecycle.
Dimitrov Krishnan, Head of Volvo CE India, said the strong reputation of SDLG products for reliability and performance will help the new excavator line get off to a good start:
“Over the past few years we’ve seen our SDLG wheel loaders and motor graders achieve market-leading positions in the sectors they’re active. That gives us full confidence to introduce the SDLG line of excavators to India, starting with the 13 t class. In 2021 we are expecting continued demand for excavators to fuel India’s ongoing infrastructure development, and our SDLG products will be perfectly placed to meet our customers’ needs.”
Cool and comfortable
The first SDLG excavator model to be launched in India is the 13 t E6135Fi, with the first units already in the country and heading to dealers for immediate sale. This new machine is loaded with technology, including a powerful DDE Deutz engine and advanced hydraulic system, and has been designed with operator comfort in mind. Indian operators often spend seven to eight hours in the cab continuously, so it is essential they feel comfortable and as fresh at the end of their shift as at the beginning. Air conditioning is installed in the E6135Fi as standard and the cab is extra spacious with all joysticks and controls laid out ergonomically. The superior visibility of the surrounding jobsite offered by the machine’s cab also helps to make operation safer and more productive.
Maintenance made easy
The E6135Fi excavator’s robust design means that it only requires maintenance every 250 to 500 hours, when all service points can be easily and safely accessible from ground level. The colored LCD screen in the cab updates operators on the health and movements of the machine for preventative maintenance, promoting high uptime and low total cost of ownership.
Reliable roadbuilding
The number one application for the new SDLG E6135Fi excavator is expected to be road construction, which is a major growth driver in India. The Indian government has invested a lot in its national infrastructure pipeline and the quality, reach and affordability of the E6135Fi makes it an ideal choice for contractors working on these projects. The machine is also well suited to urban construction projects – such as the development of smart cities – and to smaller quarries, especially those supplying the road construction sector. A further sector expected to take interest in the new excavator is the water sector, where the unit represents a perfect tool for digging irrigation channels, as the Indian government looks to bring greater efficiencies to its vast agricultural industry and to provide safe drinking water for the entire population.
Following the roll out of the SDLG E6135Fi, other excavators in the range will be launched to Indian dealers in the coming months.
“We are very pleased to announce the launch of SDLG excavators in India. India is an important market to the Volvo Group, where we see a growing need and demand for the high quality yet affordable products we have to offer. Given the existing popularity among Indian customers of SDLG wheel loaders and motor graders and the extremely high standard of our dealer service support, the introduction of the E6135Fi and subsequent excavator range is sure to be another success,” says Surat Mehta, Head of SDLG India.