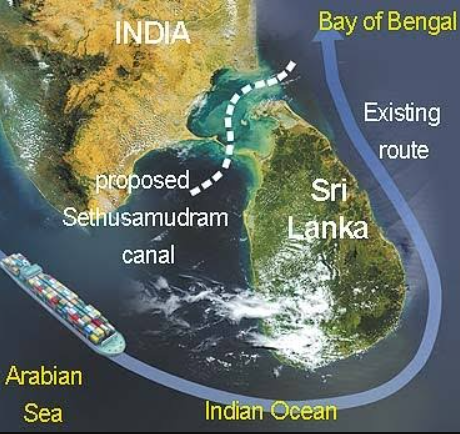 The special purpose vehicle (SPV), Sethusamudram Corporation Ltd (SCL), for developing the Rs 2,427.40 crore Sethusamudram project between India and Sri Lanks is set to be wound up.

This comes against the backdrop of the government initiating the process of selling its 63.75% stake in the Shipping Corporation of India (SCI).

The Sethusamudram maritime project was aimed to create a new shipping lane connecting the Bay of Bengal and Gulf of Mannar through the Palk Strait and Palk Bay. The project was to be financed through equity contributions from state-run firms, including SCI, which is under the administrative control of the Ministry of Ports, Shipping and Waterways (MoPSW).

According to a government document accessed by the media, a resolution has been passed for seeking an additional grant of Rs 115.72 crore from the government to settle the dues of the Dredging Corporation of India (DCI) for the dredging works carried out in Sethusamudram Ship Channel Project and also a proposal to MoPSW for winding up of SCL along with fund position.

Dredging works in Adam's Bridge region, also known as Rama Setu, was stopped by the Supreme Court in an order issued in August and September 2007 following petitions filed by individuals and groups.

The document noted that the Supreme Court's final hearing, which was scheduled in April 2018, had been withheld indefinitely.

According to the document, works had been suspended since September 2007, consequent to an interim stay by the Supreme Court for carrying out dredging operations in Adam's bridge area. Pending a final decision on alternative alignment, all the dredgers were withdrawn since July 2009.

Besides SCI, the project also saw equity participation from the DCI and the Port Trusts of Chidambaranar, Paradip, Kamarajar, Visakhapatnam, and Chennai.

The government had appointed SCL to raise finance and to undertake activities to facilitate the operation of a navigable channel from the Gulf of Mannar to the Bay of Bengal through Palk Bay (Sethusamudram Ship Channel Project). SCI has invested Rs 50 crore in this project, as of FY 2016-17.

Also read: DPGC and others bid for Shipping Corporation of India