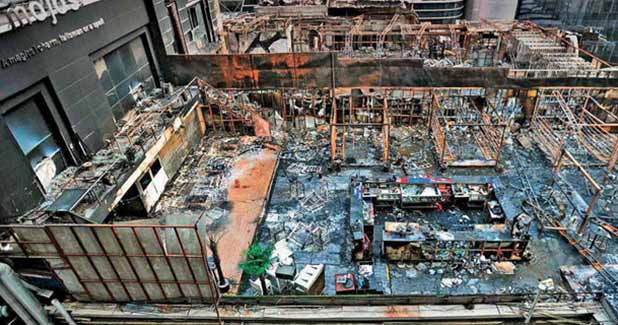 What can be done to avoid tragedies such as the recent eight breakouts within a month in Mumbai?

India is no stranger to infernos that indiscriminately devour lives and property, leaving devastation in their wake. The Uphaar cinema theatre tragedy in 1997. The Kumbakonam school accident in 2004 that killed 94 school children. And now, the Kamala Mills shocker that claimed over 14 lives. In fact, Mumbai's track record is especially dismal in this regard, with eight recent breakouts, just within a month. Whether it is the incident at the Mojo Bistro restaurant or even the fire at the Sessions Court building, the Maximum City needs to heed the insistent wake-up calls and become more fire-ready. From short circuits and cylinder blasts to the use of flammable materials, a host of triggers need to be examined and sustainable fire-prevention systems need to be set in place on a war footing.

Negligence: The prime culprit 'One of the main problems is that many restaurants are in old buildings, some of them over 50 years old,'says Samir D'Monte, Founder and Principal Architect, SDM Architects. 'There is no special building code that speaks about retrofitting or modifying older buildings to make them safe and in line with modern fire safety standards. The National Building Code (NBC) of India is a good document that has proper safety standards, but it applies mainly to new buildings. It is not clear, which code applies to old structures.

The other problem is that the fire department is perhaps not as strict as it should be in issuing permits.

As far as I know, no restaurant has been refused a fire permit.' According to him, the lack of concern for human safety and neglect in installing fire-fighting systems and providing adequate fire-escape routes and staircases are key contributory factors to such disasters.

'Lack of fire drills and changes in design without proper consultation make matters worse,'adds Rahul Kadri, Principal Architect, IM Kadri Architects. 'Each fire exit should have a door that opens from inside. Most of the time, it is locked. At times, fire exits are used as storage spaces, thus cutting off exit routes.'

Following norms
Laying emphasis on the need to take measures at the design and planning stage, Kadri points to the ground rules set by the NBC.

'A simple self-certification is enough for monitoring,'he says. 'It can be done by the society every six months. Third-party audits are a bit too much. This is just a report that can be sent to the fire department and it can be done on a self-certification basis. NBC contains all the measures that need to be taken to have fire-compliant premises. Those directions have to be taken seriously and followed.'

Nilesh Dongre, Vertical Head, Edifice Consultants, insists on multiple escape routes to avoid untoward incidents in case of fire breakouts. 'Checking and being vigilant are collective responsibilities of everyone,'he says. 'In addition, proper checking of implementation of norms has to be done by the concerned authorities.'

When asked about the role of NBC and third-party audits, Dongre speaks of the implementation of the updated set of rules according to the NBC 2016 guidelines. 'The chief fire officer (CFO) also has norms as per the area. Those should also be considered during design and implementation. Recommendations made should be followed.'

Structural engineers have an important role to play during the construction of a building - they are responsible for ensuring the safety and durability of the project. 'Materials used need to be fire-resistant,' insists Dr HM Raje, Director, Raje Structural Consultants. In his view, planning is usually confined to paper and not brought into practice. Elaborating upon false claims of buildings being fire-compliant, he adds, 'The fire audit is never carried out by a structural engineer but by specialised personnel who are experts in fire audits. Unfortunately, in most cases, the fire audit is a mere piece of paper and not a serious document.'

Raje, too, strongly recommends following the norms set by NBC 2016, which has detailed instructions on fire safety. The code lists requirements for different users (residential and commercial buildings, for instance), such as the number of exits, placement of extinguishers, a dedicated water supply, fire-retardant building materials, and so on. 'Rather than cutting corners, professionals like MEP consultants and fire experts should be consulted and technical details followed meticulously,' he adds. Raje also lays emphasis on carrying out proper audits and monthly drills. 'Periodical maintenance of fire gadgets need to be carried out and all electrical cabling and appliances need to be checked on a monthly basis,' he says. 'During planning or modification, the architect or interior designer should take proper care in designing the kitchen areas and toilet blocks, maintain proper passages, and introduce proper signage for exit during fire.'

Code of conduct!
For his part, V Suresh, Vice Chairman, National Building Code of India, believes independent third-party auditing will be useful in post-occupancy stages for NBC. 'The periodic structural audit after every five years and an annual fire audit will help,' he says. 'The continuous presence of a professional asset and facility management team will take care of the deficient areas from time to time and enhance the life and durability of the building.'

A proper and systematic understanding of the provisions of the code will play a key role in their implementation. 'The next generation of planners, architects and engineers of various shades, including interior designers and decorators, have to plan, design and construct accordingly,' reasons Suresh. 'This process has to permeate for the development of the whole city, as one sees in developed countries. The smart city initiatives now launched give us a great opportunity to achieve this goal.-

That said, it will clearly take a collective effort - on the part of building owners, users and the authorities - to take every possible precaution, ensure adherence to safety norms, and conduct regular audits to stay fire-safe. It's high time!

Recommendations
Multiple escape routes help avoid untoward incidents in case of fire breakouts; fire exits should have doors that open from inside.
Construction materials used need to be fire-resistant.
Need to implement periodic structural audit after every five years and an annual fire audit.

To share your views on this report, write in at feedback@ConstructionWorld.in