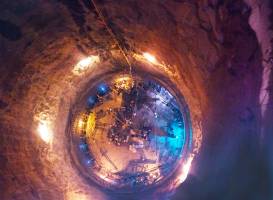 HCC opted for slipforms for the concreting of a 115-m-deep surge shaft for the Punatsangchhu hydropower project Stage I, a 1,200-mw, run-of-the-river project in Western Bhutan.

Slipforms have to be in a continuous motion so that the concrete does not stick to them. The speed of this formwork depends on several factors like the weather condition, the amount of concrete poured at a time and the size of the structure. As the slipform can move (slipping rate, usually between 5 and 30 cm/hour) whenever the concrete can carry the load of its weight in the lowest parts of form sheet, the likely concrete setting time was determined based on the weather conditions (temperature, humidity, etc), cement ratio, type of cement, slump and admixtures.

Usually, the slipform structure rises up with the daily progress of 0.75 m/day in standard conditions. However, at Punatsangchhu-I HEP, the daily progress harnessed from slipform was at an average of 1 m/day. The concrete lining thickness varied from 850 mm at the top, 1,200 mm in the middle and 1,500 mm at the bottom. Concrete was poured into the forms in layers of about 200 mm.