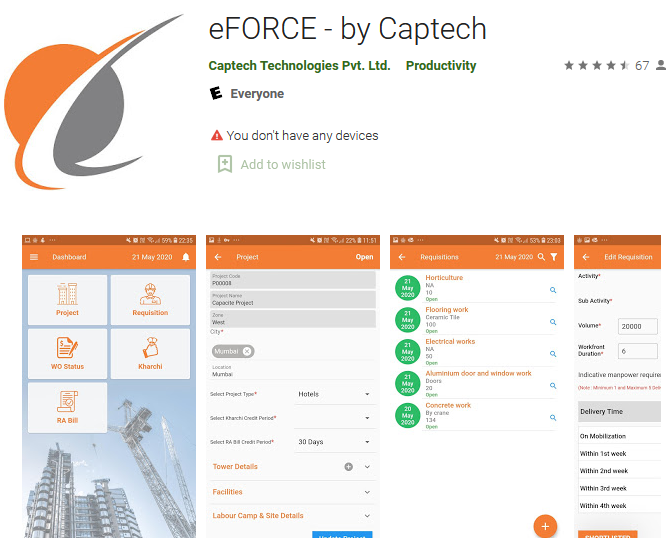 Infrastructure technology platform eFORCE by Captech Technologies, which was launched in June 2020, is set to expand pan India and organise the sector in cities other than metros where the company has already established its presence.

eFORCE allows infrastructure companies via its real-time platform to access thousands of labour contractors/specialised vendors and merchants to grow the supply chain and will also be able to filter and choose contractors in terms of needs, experience, and bandwidth.

The platform can deploy more than half a million labourers via thousands of general contractors registered on the platform. It intends to organise the unorganised migrant and non-migrant labour contractor market in the construction industry. eFORCE also helps developers to mobilise projects quickly and mitigate the delays in projects owing to a shortage of skilled labours.

The multilingual platform has already won the recurrence orders from the elitist of the names in the real estate sector like Oberoi Realty, TATA Projects, Capacit'e Infraprojects, NCC. Other than the top names, the app also serves the need for 20 more large real estate developers and contractors in the country in areas such as Mumbai, Delhi, Jaipur, Bhubaneshwar, Vizag, Bangalore, Pune, Kolhapur, and many other cities.

According to Asutosh Katyal, Founder and CEO of Captech, with the current budget announcement to push urban infrastructure in India, both private and public sectors have been using the platform to become beneficiaries of government policies.

Katyal told the media that eFORCE noted the abundant potential of the construction industry, and the company would help companies to adopt new digital techniques to escalate productivity and efficiency.

The company is also planning to expand its presence to the major cities of north and west India creating awareness about the new real estate digital marketplace.

Katyal said the company is in the process of deploying several thousand labours through our digital network of KYC verified sub-contractors. According to Katyal, currently, eForce has around 100 projects registered pan-India.