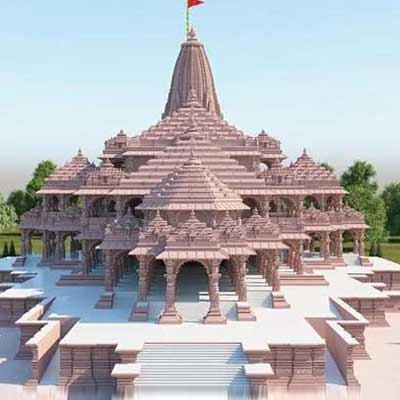 Prime Minister Narendra Modi, on Wednesday laid the foundation stone for the construction of the Ram Mandir. He established a symbolic 40 kg silver brick marking the commencement of the construction process that had been previously delayed due to the pandemic and the Indo China war. Uttar Pradesh Chief Minister Yogi Adityanath and other senior BJP leaders were also present on the occasion.

On February 5, this year, PM Modi had announced the formation of an independent trust – Shri Ram Janmabhoomi Teertha Kshetra – which was given the responsibility to take every decision with regards to the construction of the temple. The Sompura family, headed by Chandrakant Sompura, has been chosen as the master architects for the temple’s construction. Sompura will work with construction giant Larsen and Toubro (L&T), who has been awarded the contract to build the temple.

As reported, the construction of the temple is expected to be completed in about 3-3.5 years, at a cost of Rs 3 billion. It is known that India’s largest contractor L&T had collected soil samples from the construction site about two weeks ago for further testing them. The 67-acre land for construction has already been leveled.

Notably, artisans spread across different locations have already begun with the carving of the stones required for the temple’s construction, based on designs by Sompura. And, 40 per cent of the carving is known to have already been completed.

The temple will be constructed in the ‘Nagara’ style of architecture and will be almost double the size of what was originally planned, to accommodate more devotees. Over 200,000 bricks with “Sri Rama” inscribed in various languages will be utilised in its foundation. The temple will consist of a large structure of three floors with 366 pillars and five domes. As reported, the idol of the primary deity will be housed in the inner sanctum (ground floor) of the temple, which will be octagonal in shape. The second floor will have a Ram Darbar and the third floor will accommodate the other increase in spaces of the structure. A Shikhara (tower) will be built over the sanctum sanctorum. The Mandaps will be followed by the Garbhagriha, the darkest space in the temple. This has been designed to ensure that as one proceeds towards the deity, it should get darker so that the focus remains on God only. At a height of 161-ft, the temple will be designed in accordance with the Vaastu Shastra and the Shilpi Shastra. A memorial wall in the honour of those who were involved with the temple movement will be erected, as reported earlier.

The original design of the magnificent temple dates back to 1988. It is known that Chandrakant Sompura was approached regarding the construction of the temple by Industrialist Ghanshyamdas Birla who then introduced him to Ashok Singhal (then VHP President). The Sompura family is a family of temple architects who has built numerous grand temples around the country and elsewhere.

With regards to the funds, around 10 crore families will reportedly be contacted for financial support to build the temple.