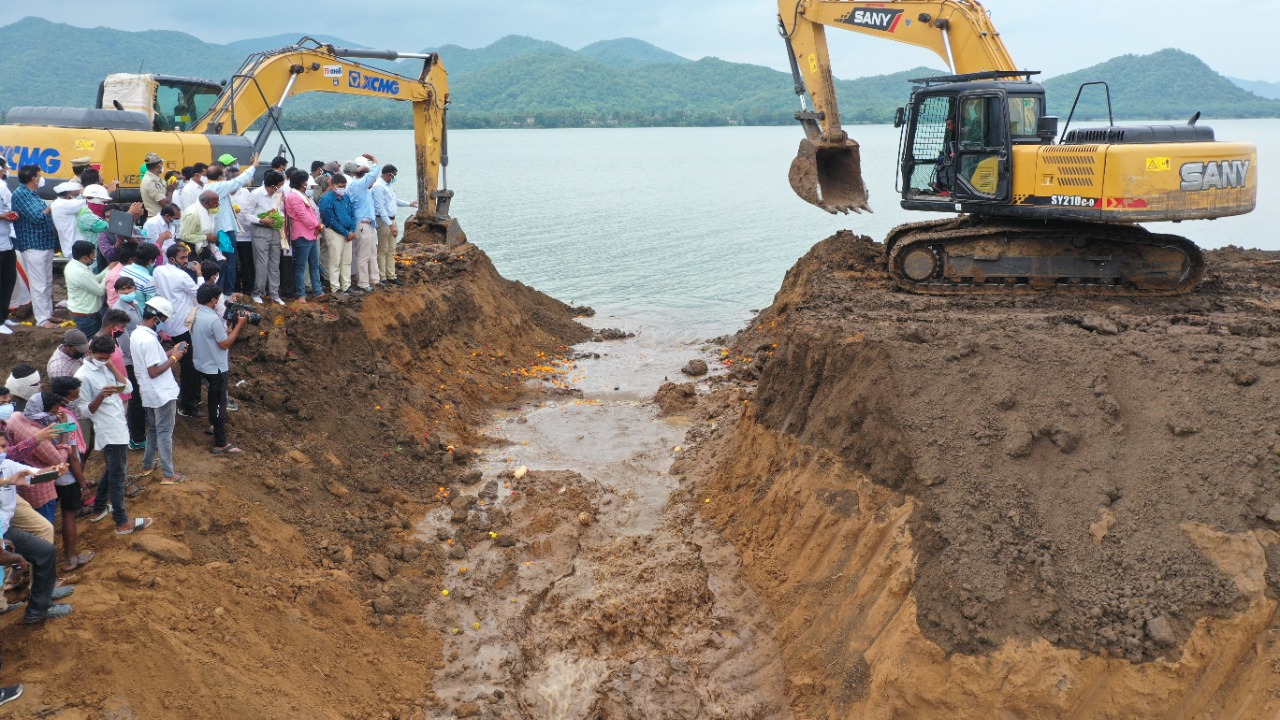 The Polavaram Project was initiated on June 11th, by the water release through the spillway. By removing the ring bund, the Godavari river got diverted to the spillway through the approach channel. Under the supervision of state water resources department officials, MEIL engineers executed this critical exercise. Alla Nani, deputy chief minister and minister for health Anil Kumar, minister for irrigation participated in the event virtually. Narayana Reddy, engineer-in-chief, Sudhakar Babu, chief engineer, Polavaram Project, and Ranga Rajan, associate vice-president, MEIL, are present. The officials conducted a traditional pooja on this auspicious occasion.

Progressing at a brisk pace

The spillway, three gaps (ECRF 1,2,3), hydropower plant and the water transport works are crucial in constructing Polavaram Project. MEIL has completed the spillway at a brisk pace under the engineering principles (work manual and protocol). The approach channel, spillway gates, spill channel and pilot channel work are almost completed in the current season. Because of these constructions, the cofferdam was able to stop the Godavari river flow and the Godavari delta did not get the water from the upstream.

From now onwards, both Godavari districts, Tadipudi, Pattiseema, Pushkaram and other Godavari delta areas, will get irrigation and drinking water through the approach channel. Until recently, these areas used to get the water through natural river flow. The Godavari river flows between June to December and large-scale floods occur during the August, September and October months. Godavari receives water from the Sileru and Machkand hydropower plants in summer and reaches the Godavari delta at a minimal level. The water diverted through the approach channel from today merges with the Godavari again through the pilot channel.

The water level in the Godavari is rising after the closure of the upper cofferdam. The submerged villages were evacuated and provided rehabilitation. The meteorology department is expecting heavy rains in the Godavari tributary Sabari river catchment area. As monsoons have already actively spread, heavy rains in Chhattisgarh, Odisha and Sabari, Pamuleru catchment areas are expected. In such a case, the water should be diverted over the spillway. Even if there is no major flood, we need to divert the water into the Godavari river through an approach channel, river sluice and pilot channel to cater for the needs of the Godavari delta.

The most volatile river Godavari’s diversion for 6.6 km has been completed. The second largest river in the country experiences floods ranging from 35 lakh to 50 lakh cusec. Diversion of these massive floods for 6.6 km is not an easy task. It is an engineering marvel on any parameter. The Godavari river’s natural flow, diverting to the right side, will continue even after completing the project.

Three gaps to be constructed in the middle of the river, Earth Cum Rock Fill (ECRF) dam, also called Gap-2, are the largest. This ECRF dam can withstand the pressure of the 50 lakh cusec flood. To construct this vital structure, the upper cofferdam has become a necessity. As part of that, the river diverted. The length of the approach channel, spill channel and pilot channel is 6.6 km. These structures are built parallel to the right side of the main river. The approach channel was built up to 2.4 km towards the spillway. The spill channel is 3.1 km from the spillway, and the pilot channel is 1.1 km from the end of the spill channel. The upper cofferdam was constructed 2480 m long and 42.5 m in height, and three reaches. MEIL has filled the upper cofferdam gaps as per the government decision. As a result, even 30 lakh cusec flood flows through the approach channel and the construction works will not be obstructed.

The fastest execution of works

Megha Engineering and Infrastructures Limited (MEIL) have completed the works required to divert the Godavari river flow in a record time. To turn the Godavari to the right and reach the spillway, excavating the approach channel to 2.4 km was necessary. It looks like another river. Of the 1,54,8800 cu m of earth excavation, MEIL completed 1,04,88,00 cu m. Out of 5.92 crore cu m of earthwork 5.24 crore cu m is already completed. The works are progressing round the clock.

Of the total CC blocks (spillway) of 17 lakh cu m, MEIL completed 15.17 lakh cu m. The crucial spillway can regulate 50 lakh cusec of flood and releases to the downstream. It is larger than the Three Gorges dam, which can regulate only 47 lakh cusec. To withstand the flood pressure, the world's largest gate erection and 15.17 cu m of concrete work was completed. To operate the gates on the hydraulic method, 22 power packs to 44 gates were fixed. 28 radial gates were raised to release the flood in this season.

So far, 76.29% of project headworks have been completed. Many villages, including Polavaram, are at risk of flooding as water diversion takes place through an approach channel. Up to one lakh causes of floods in the spillway will not have any adverse effect. However, floods above 12 lakh cusec will have an impact. Flood at a minimum level will affect nine habitations. As the flood increases to 28 m high, the flood-prone habitations will increase. If the flood reaches the spillway level (45.72 m), about 235 habitations will be flooded. Accordingly, the government is preparing a plan and rehabilitating the villages.