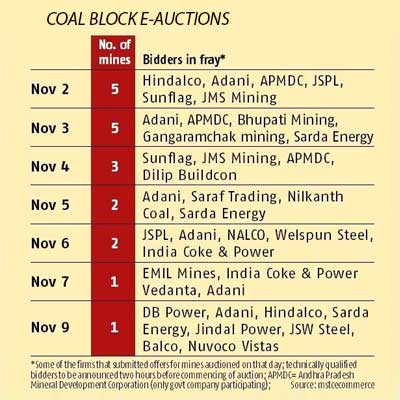 In the second and final round of the auction process of coal mines this week, 19 coal blocks will be put up for e-auction. The auction starts November 2 and ends November 9. Technically qualified bidders will be announced two hours before auctioning begins on Monday the 2nd.

An official spokesperson said there will be hardly any manual intervention after initial offers are uploaded. “Two officers from the Central Mine Planning & Design Institute and the Ministry of Coal will open the initial price offers and upload on the bidding platform of MSTC E-Commerce,” the official said. “The software will itself declare the highest and lowest offer. The bidding will commence from the highest initial price offer.”

Process: The e-auction will be conducted on the e-commerce portal of government-owned MSTC. The bidding time for every mine is two hours, the bid submission window eight minutes. Bidding will close when there is no bid for eight minutes. As long as the bids keep coming, the process can continue beyond two hours, a ministry official said. The MSTC system will declare the highest bidder or the preferred bidder. The nominated authority of the commercial coal auction will evaluate all bids, submit to the Ministry of Coal, which will declare the successful bidder.

Eligibility: Coal mine auctions began in June after the ministry opened the process for mining and sale. In an amendment, international companies, non-mining companies, and large miners were made eligible.

Adani Enterprises has submitted bids through its various companies for 12 mines, the highest among all contenders. Apart from Adani, Hindalco, Jindal Power, JSW Steel, Vedanta, Welspun Steel, non-coal companies, medium-sized enterprises, and state government mining companies are participating in the auction. However, no international player has placed an offer.

The technical round under which the companies submitted their eligibility and initial price offer closed last month. Of the 38 coal blocks offered by the Ministry of Coal, it received interest from 46 companies for 19 blocks.